I had a weekend dedicated to the pleasures of the senses. The good company of friends, scrumptious food, wine and dancing into the night: the philosophy of Epicurus suitably and diligently put into practice with the ardor of a dedicated student. The Apollonian and Dionysian dichotomy yielded to the latter. There’s an innocent abandon when one surrenders to the gratification of the senses, a complete surrender to the moment and an implicit trust in the unraveling of one’s life.

I’m not, however, advocating a life of excess and irresponsible behavior, but the simple relinquishment of worries and the need to control things from time to time, a tip of the scales by exercising the choice we have to trust the natural flow of life and lose oneself into a day and night of revelry and chaos. It rejuvenates the cells and unblocks energy in the body. I understand a lot of people can’t quite balance these energies and end up in a cycle of addiction that can involve gambling, partying and sex.

Prostitution has been prevalent in all ancient cultures moving on to the present. From ancient Mesopotamia, Greece and Rome up to the red light district in Amsterdam, the sex industry has revealed itself as one of the oldest professions. I felt compelled to visit this world this last weekend. Okay, before you get all on fire, hold your horses. I did not mean literally.

I felt inspired by an exhibit I saw at the Asian Art Museum entitled: “Seduction: Japan’s Floating World. This exhibit covers the works, objects and sartorial pieces from the Yoshiwara walled district of Edo (present day Tokyo). In simple words Yoshiwara was the red light district in Edo in the early 17th century until well into the 20th century when the Japanese government outlawed prostitution after WWII in 1958.

Edo literally means “bay-entrance” or “estuary” and it was the former name of Tokyo. The Edo period, ruled by the Toguwawa Shogunate (the last feudal military government in Japan), was a period of great economic growth and a widespread interest in arts, culture and entertainment. During this period, Edo became one of the largest cities in the world and gave birth to an urban lifestyle that facilitated pleasure in many forms. This culture was known as “Ukyio” – “The Floating World”.

The exhibit at the Asian Art Museum gives us more than a glimpse into this sunken world. It offers us the opportunity to experience the beauty and extravagance of a privileged elite group that enjoyed the sumptuous, opulent and lavish experiences that money could provide. The system was divided into classes and the average individual would end up with lower class courtesans for a cheap price. A darker reality hid beneath the surface of the illusion created by the commerce of sex. That’s the way it was; that’s the way it is.

By 1700, Yoshiwara was a bustling complex that catered to the needs of every individual’s taste and budget. But this moated complex was more than just brothels and sex. It was a sophisticated entertainment structure that involved singing, dancing, parlor games, intricate tea rituals, food and wine, and the art of kabuki theater; all intentionally put together to make the men linger in the premises and spend their money while enjoying every pleasure they so desired in a memorable night that would guarantee their return many a night thereafter. 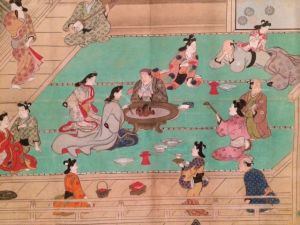 In this exhibit: “Seduction – Japan’s Floating World”, the viewers can delight in a considerable display of magnificent pieces, prints and exquisite kimonos, outer robes and kimono-shaped bed covers embossed with dazzling patterns and motifs. This combination of ravishing elements conjured up a fantasy world that thrilled the viewer and offered them an experience of joy and elegance they would not forget. To the expensive, well-trained courtesans, the only way out would be to secure a patron who would take care and support them, thus giving them the possibility of a new life outside the confines of Yoshiwara. The unlucky, poor ones would eventually die too young, victims of the sex trade.

To me, from the numerous pieces displayed, the highlights were, undoubtedly, the splendid and incomparable hand-scroll “A visit to the Yoshiwara” (late 1680’s) by Japanese artist Hishikawa Moronobu (1618 –1694). His hand-scroll astoundingly measures 21” ⅛ in height x 693 ½ in width. A feast for the eyes showing the splendor of Yoshiwara spread across 58 feet of scroll paper. Moronobu himself was well-acquainted with the structure of the place, being married to a former courtesan. The details are extraordinarily and meticulously represented, from the entrance gate where the visitors arrived, passing through a primping station, an assignment house, the bustling streets with commerce, merchants, prostitutes lounging in latticed parlors, couples engaged in lovemaking, to the final scene where the clients would pay their bills on the following day. Yoshiwara was often referred to as the “Nightless City” – appropriately suggested in the exhibit as a present day Las Vegas, perhaps. 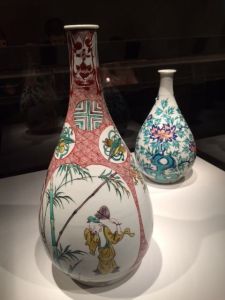 The other two pieces that struck me for their rich detail and gracious artistry were the “Pear-form bottle with Daoist sages (ca. 1655-1680), and the “Pear-form bottle with peony and decorative-rock design (1650-1660). These spectacular porcelain bottles are extremely attractive and were possibly used to serve an alcoholic beverage such as sake during festive events. These are expensive, luxury items that only the wealthiest consumers of that period were able to afford.

This journey back in the past of old Tokyo shows the world that is not very different from that one we find in big cities all over the world. The industry of sex still capitalizes on human desires, weaknesses and the fleeting pleasure-seeking culture that exploits beauty and youth for a profit. In our convoluted and cramped cities, huddles of kids come out at night to work the streets; many of those still in their early teens. The stories are similar: poverty, escaping abusive parents and abandonment. These kids end up in the streets, eventually caving in to the lewd pursuits of men from a more privileged economic status. The world they will know will be one of drugs, sex, robbery, diseases and deceit.

All over the world prostitution runs rampant as countries struggle with a staggering poor economy that forces families to use their kids as bread winners out in the streets, at any cost. Those kids are denied of a healthy childhood and will be psychologically marred for the rest of their lives, making it almost impossible for them to be rehabilitated into society. Everywhere we hear news of sexual slaves, rape, abandonment and neglect. Losing the trust in their families, these kids grow up to be cynical individuals that will use sex and robbery as a means of survival.

Upscale and ritzy prostitution might look glamorous on the outside, but the consequences are likely the same. The individual, regardless of their looks and youth, will always be regarded as a second-class element within their community and will often be a target to violence, discrimination and abuse. The Yoshiwara presents us a world of elegance and luxury, but behind this alluring façade, the less talented and poor prostitutes slaved themselves away while hoping that one day some generous patron would whisk them away and save their lives. As the seasons come and go, so do our lives. The Floating World would no longer float under its own weight, and the waters of history would silence the voices and sobs of those who perished within it.

In the end, we are left with the Latin aphorism “CARPE DIEM (“seize the day” or “live in the moment”) in counterpoise to “MEMENTO MORI (“remember (that you have) to die”) for life’s impermanence is reflected all around us, and the beauty of the cherry blossoms vanishes in the blink of an eye.

On a brighter note, here’s an Oiran Parade, in a scene from the movie “Yoshiwara Enjo”, showing “hachi monji” – a complicated way of walking invented by a legendary courtesan Katsuyama, and used by high-ranking Japanese courtesans – tayuu and oiran. This intricate walk of a courtesan, as they paraded on the streets, could last up to two hours. The effect is spellbinding: